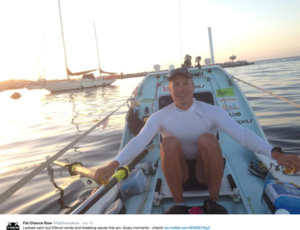 As negotiations between Trulia and Zillow intensified in recent weeks, culminating in a $3.5 billion deal announced on Monday, one crucial player was conspicuously absent. Sami Inkinen, one of Trulia’s founders and a board member, was nowhere to be seen. He did not attend any of the meetings with his fellow directors or participate in discussions with investment bankers from Goldman Sachs and JPMorgan. But he had a good excuse. Mr. Inkinen and his wife, Meredith Loring, were rowing across the Pacific Ocean. His jaunt on the high seas was hardly a pleasure cruise on a luxury yacht. Mr. Inkinen and Ms. Loring are fitness buffs. They set out from Monterey, Calif., on June 18, aiming to row, unassisted, to Honolulu. Should they complete the journey, they would become the first man-and-woman pair to row from California to Hawaii. Depending on their time, they could set the record for the fastest crossing.